For the second year running I’ve been tutoring and performing at Peter Pegnall’s brilliant A Casa dos Poetas (The Poetry House), a residential course which took place in mid-May in the charming Algarvian town of Silves.

Last year I stayed with five of the other participants up in the hills, this year we were based at La Colina dos Mouros and my room had a gorgeous view of the Castle which dominates the little town. 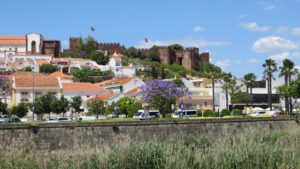 Some free time on the first day meant I could do more than just admire this stunning castle from afar.  Once inside there’s very little of the structure left, although the Moorish fortifications are some of the best preserved In Portugal.  It’s thought to have been built on a Lusitanian castro by the Romans and Visigoths and then expanded by the Moors who were there between the 8th and 13th centuries. Something that struck me was the presence of huge water tanks, essential when under siege!  One of these cisterns was hosting an exhibition on the Iberian lynx, which, once highly endangered, is being reintroduced. I used the words on the panels to create a found poem which served as an example for my workshop on this subject later in the week.  I’ve become more and more interested in different forms of found poetry and was particularly struck by Raymond Antrobus’s erasure/redaction of Ted Hughes’ poem The Deaf School, which appears in his award-winning 2018 poetry collection The Perseverance.  The act of erasure is a radical interaction with a text, but in this case I went for the more conventional excerpting and re-mixing.

So, here’s a taste of the Iberian lynx (all words, including the title, found):

I used to see lynxes

he can climb trees   swim

The loose theme which tied many of the workshops together  this year was The Outsider – a very fruitful topic.  I spent a lot of time wishing I spoke Portuguese, not knowing a language makes you feel very alien and on the fringe of things, so certainly a very appropriate theme for the week.  I’m fortunate that I know enough Spanish to get by with menus and rough guesses, but not enough to really join in.   Was I a tourist?  Some of the time I was teaching and some of the time I was a student.  And then there we were on a hill looking across the river to the town, very much on the outside, looking in…  Not to mention that poets tend to be observers, placing themselves at the edge of things in order to record and transform…

Andrea Holland led a very thought-provoking workshop using Elizabeth Bishop’s Sestina, one of my favourite poems.  Sestinas are so hard to write but here you barely notice the cyclically repeated endwords, so skillful…  You can read the text here.  It’s interesting to think of the child’s position, whether they belong in this house, or not:

Gérard Noyau once again encouraged us to provide a working translation of one of his father, René’s, poems, an extraordinarily complex piece dealing with the history of slavery.   René was a Mauritian surrealist poet so there were layers of both language and culture to unpick.  We worked in groups, drafting up a rough translation before putting our poet hats on and making the language work to the best of our ability. During the residential Gerard undertakes to translate some of our poems into French and discusses the final result in depth.  It’s such an interesting experience, it makes you question every word and nuance of meaning of the original and flags up cultural differences when you come across the untranslatable (back to the outsider again!). 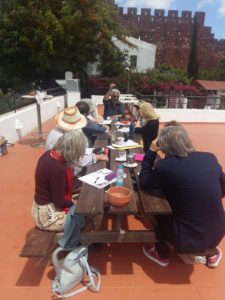 The translation workshop took place on the roof of the Café Ingles which is our home from home for the week.  Smiling staff, led by the inimitable Carlos, welcomed us for several evenings and a few sneaky gazpacho and white wine lunchtimes!  I always enjoy performing my poetry at the Café.  Last year it was quite chilly in the evenings, but this year we were able to perform under the stars in the scented night air.  I’m hoping my performing skills were enhanced this year by a great performance workshop from Naomi Foyle – thank you Naomi for helping me to breathe!

And of course, Peter Pegnall held it all together for us, not only leading two workshops but arranging trips, guest speakers and various surprises, one of which was a performance by Rogerio Cão and Nanook, passionate poetry put to music and performed in the cobbled café courtyard.

We spent a day up in the hills in a beautiful villa where Manuel Portela, writer, professor and renowned expert on Fernando Pessoa, encouraged us to create our own work from Pessoa seeds.  Pessoa, and his multiple personas, all of whom write in different voices, represent the ultimate outsider, someone who is so Other their Self is lost in 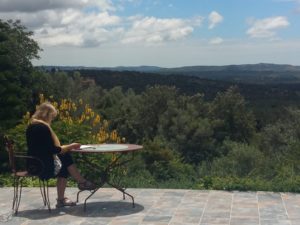 Our hosts at the villa were Manuel Neto dos Santos and his partner, Bert, who made us a superb meal as well as giving us the run of their beautiful gardens and patios.  Manuel is an Algarvian poet whose words are permeated with melancholic longing and he has at least eight collections to his name.   During the afternoon he introduced us to a variety of other Algarvian poetic voices before we thanked our kind hosts with our own voices, performing words and music by the pool (and they still didn’t make us do the washing up!). 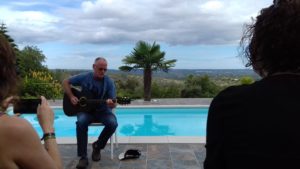 Our residency this year was a bit later than in 2018 which meant the stork chicks were almost adolescents!  As I sat on my balcony I could hear extraordinary clicking and clacking from all around and after a bit of googling discovered the most amazing fact: did you know  storks don’t have voiceboxes but communicate by clattering their beaks? I had a view of at least three storks’ nests from by balcony and if you walk in any direction in Silves you can feast your eyes on multiple nests, large and small and low and high.  One of the biggest is on the old Communist Party HQ next to the police station, but it’s tricky to catch on camera, the sun always seems to be in the wrong place.  I thought the storks deserved their own poem this year so this is a Japanese style effort, a sort of double tanka! 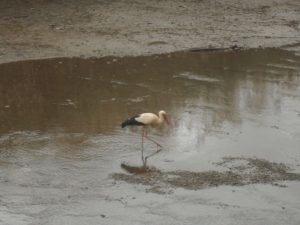 the knowledge of tide

in their slurried blood

they clack their beaks

of their cartwheel nests

to their voiceless kings 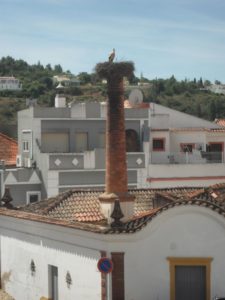 Our afternoon off was bright and hot and most of us opted to go to the beach at Carvoeiro for a speedboat trip to the famous Benagil caves.  This whole coastline is like a magical grotto, turquoise water, limestone sea caves sculpted by sand and time in colours which reminded me of those glass containers you used to find at seaside places with differently coloured layers of sand (I think I had one which was lighthouse shaped).  The boat trip had to have a coda of an ice cream (pastel de nata flavour of course!) before a cold half-hour dip in the salty Atlantic. 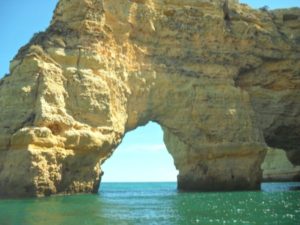 In a way, I quite enjoyed my outsider status.  It meant I could be someone a little different for a while, in my head at least!  Once again, I felt very privileged to have taken part in this  week-long celebration of Portugal, culture, poetry and companionship.