It was strange to be back in Paris, not least because I’d had several months of clean sea air and was used to feeling constantly and rather pleasantly damp from a mixture of sea swimming and beach walking.  Just the day before I’d been swimming in the North Sea and now here I was on the steps of Sacre Coeur! (Below is a photo taken from the 8th floor of my air bnb building.) 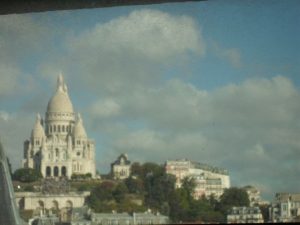 One of my aims this time in Paris was to explore the live poetry/open mic scene a little more thoroughly.  I began by attending the launch of the latest issue of “Maintenant” a New York DADA magazine.  It was an extraordinary evening from start to finish, down in the basement of the Cave on rue Marcadet.   I’m a great fan of experimental poetry and pushing boundaries and could appreciate that a lot of what went on was doing exactly that.  The main joy of the evening, however,  was discovering new poets who had an innovative and exciting way with words while still remaining accessible, and who you are unlikely to come across on the page as they are largely performance poets.  Boni Joi, an American poet, gave a muscular, dramatic performance, full of the flavours of Europe.  The biggest discovery for me was Henrik Aeshna.  Glittering eyes, a feral presence and the feeling that anything could happen as he threw jets of whiskey around and pages of poetry across the stage, but amidst the posturing there were moments of pure poetic beauty.  I’ve got a bit of a soft spot for bad boys, you know, that Kurt Cobain, Pete Doherty, Sid Vicious kind of thing… Other artists banged the on-stage piano in a brutal manner, used post-its to simulate copulation and enacted a rather engaging play across the room.  The evening ended in true DADA style with the final artist rubbing sweets on his genitals (yes, really, pants down stuff).  There was a point, but probably not one to share…

My next venture was long-standing open-mic night Spoken Word at Au Chat Noir, a typically grungey and grafittied bar in Belleville, the old working class district which is now, with Oberkampf, the height of hip.  Spoken Word describes itself as a home for “creatives and lost anglophones”.  The majority of open-micers are American and the flavour tends to be quite young, political, stream of consciousness style readings. The emphasis tends to be much more on performance than it is in the UK.  One of the featured artists was Jennifer Blowdryer, who used to head up a punk band in New York in the 70s.  She was great fun, belting out songs and reading an essay about Eva and Zsa Zsa Gabor from her new book.  The venue was an atmospheric basement space, with the calmest member of the audience by far being a short-eared rabbit who surveyed all that went on with a buddha-like tranquillity.  I read a couple of poems from Lumière to spread the word as it was thanks to my 2016 Arts Council funded residency in Paris that this pamphlet, a tribute to Paris’ cinematic heritage, came into being. 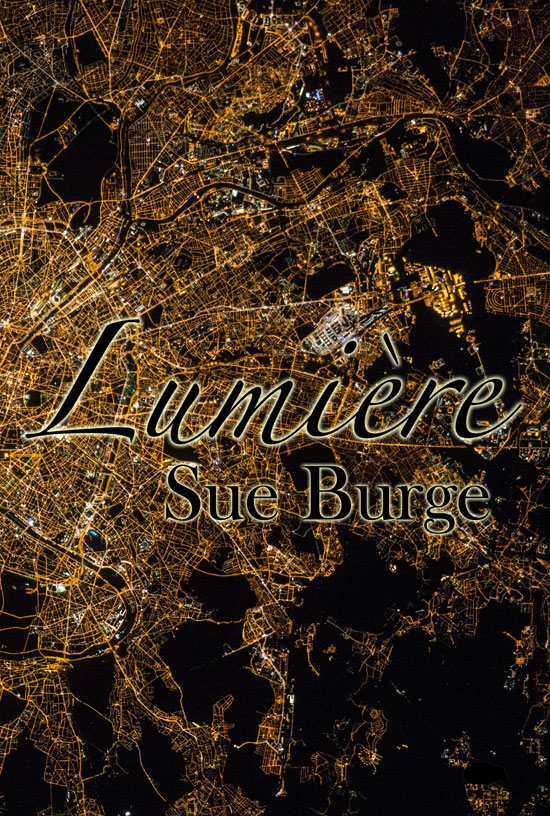 For my third and final exploration I went back to Culture Rapide, another grungey, graffitied bar in Belleville where I had read embryonic Lumière poems back in May 2016.  This meant I wasn’t heckled onto stage with cries of “Virgin! Virgin!” like other terrified newbies.  My slot followed Gertrude, a fabulous French transvestite who sang a song about working girls in Montmartre, resplendent in fishnets, beret and little black skirt.  And following me was the ubiquitous Jenny Blowdryer!   The featured act was Abdel Kader Wawi, aka 5919, a Lebanese calligraffiti artist.  The stage became an art studio as old film posters were stuck up and then covered with the most beautifully executed Arabic calligraphy of words suggested by the audience.  While he worked, two friends played guitar and sang, giving the performance a gypsyish/Moorish slant.

All three experiences were extraordinary and I felt privileged to have been a fleeting part of them.

I did, of course,  venture outside and went on long, sunlit walks on most days, sometimes clocking up around 10km in a go, but a further two highlights were both part of the thriving  cabaret scene in Paris. It was Paris fashion week and I decided the only way to properly celebrate this was to go along to the Folies Bergère and see Jean-Paul Gaulthier’s Fashion Freak Show – a cabaret spectacular which he had created to showcase his life in fashion, like peeking into his private diary.  Looking back, I don’t know how I managed to get a ticket as both Marion Cotillard and Paloma Faith were in the audience, along with other celebrities who I had no hope of identifying and a plethora of gorgeous men and women who all seemed to have modelled for J-P.  The show was fantastic, full-on dancing, electrifying music (chosen by Nile Rodgers), fashion shows featuring Gaulthier’s iconic confections and some brilliant projections including images of the young J-P watching Falbalas,  the 1945 film which was one of his earliest inspirations.  The film starred the gorgeous Micheline Presle as a woman seduced by a Parisian designer.  One of the highlights of the show for me was to see Presle in the huge on-stage projections, playing Gaulthier’s influential grandmother.  In one of those strange coincidences that makes life the colourful pageant that it is, I had a drink later in the week with my friend Juliette, who runs the fabulous Cine-Balade company and whose walks were hugely inspirational when it came to writing Lumière.  She had just interviewed Presle as she works for an organisation which restores old black and white films and one of Presle’s is hopefully slated for re-release.  Juliette had also worked with the team restoring Rue des Cascades which was one of the many films I managed to see while in Paris.  This 1964 classic is a little reminiscent of Les Quatre Cents Coups, very much seen from a child’s point of view and set in the Belleville/Menilmontant area.  It focuses on a boy’s reaction to his mother’s new boyfriend, who just happens to be black. 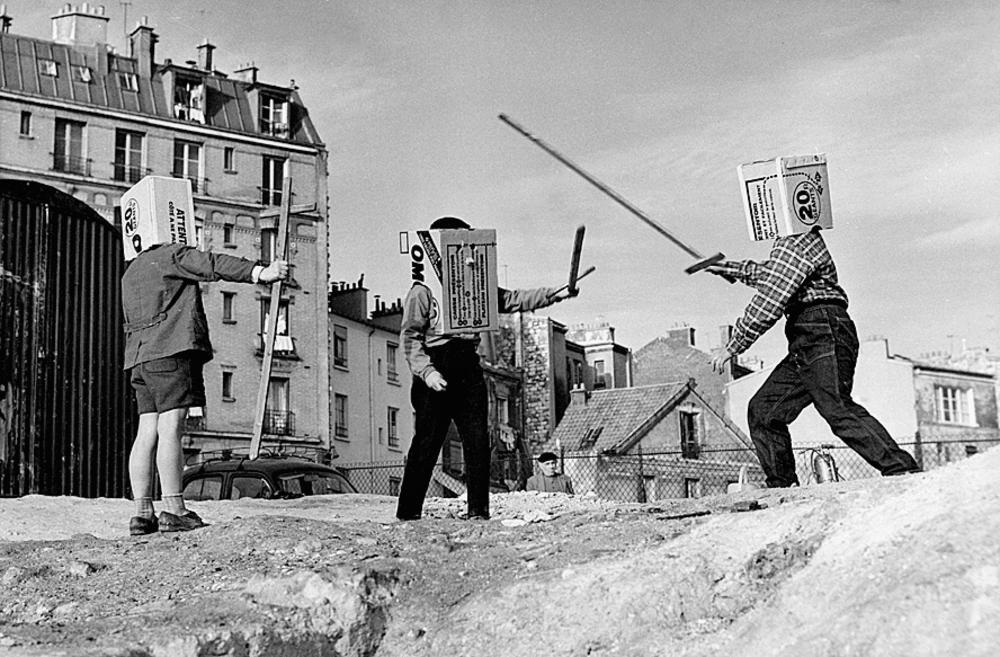 The second cabaret experience, a visit to the Lapin Agile, is probably one of my all-time favourite Parisian experiences in the 40 years since I’ve been coming to the city.  You need to be able to understand French pretty well to really appreciate it, but just to go in and imbibe the atmosphere is worth the ticket price.  It’s a famous Montmartre cabaret dating from the 19th century.  It was bought by Aristide Bruant, comedian and cabaret singer, in the early 20th century to save it from demolition.  It became a favourite spot for struggling artists and writers including Utrillo, Picasso, Apollinaire and Modigliani.

It also became famous for launching unknown musicians and singers on to greater things – singers like Georges Brassens and Claude Nougaro.  The evening starts with five or six singers and musicians around a table singing together, the songs are all French in origin and some date back to the fifteenth century.  Each musician has a solo turn, maybe with an accordion, a piano, a guitar.  There are songs by Piaf, Brassens, Bécaud and many more including Charles Aznavour, who, in his youth,  lived just below Montmartre in the 9th arrondissement and who died very recently at the age of 94.  The venue is dark, atmospheric, with old wooden tables and benches and paintings on every inch of wall space, including a copy of Picasso’s famous Au Lapin Agile. 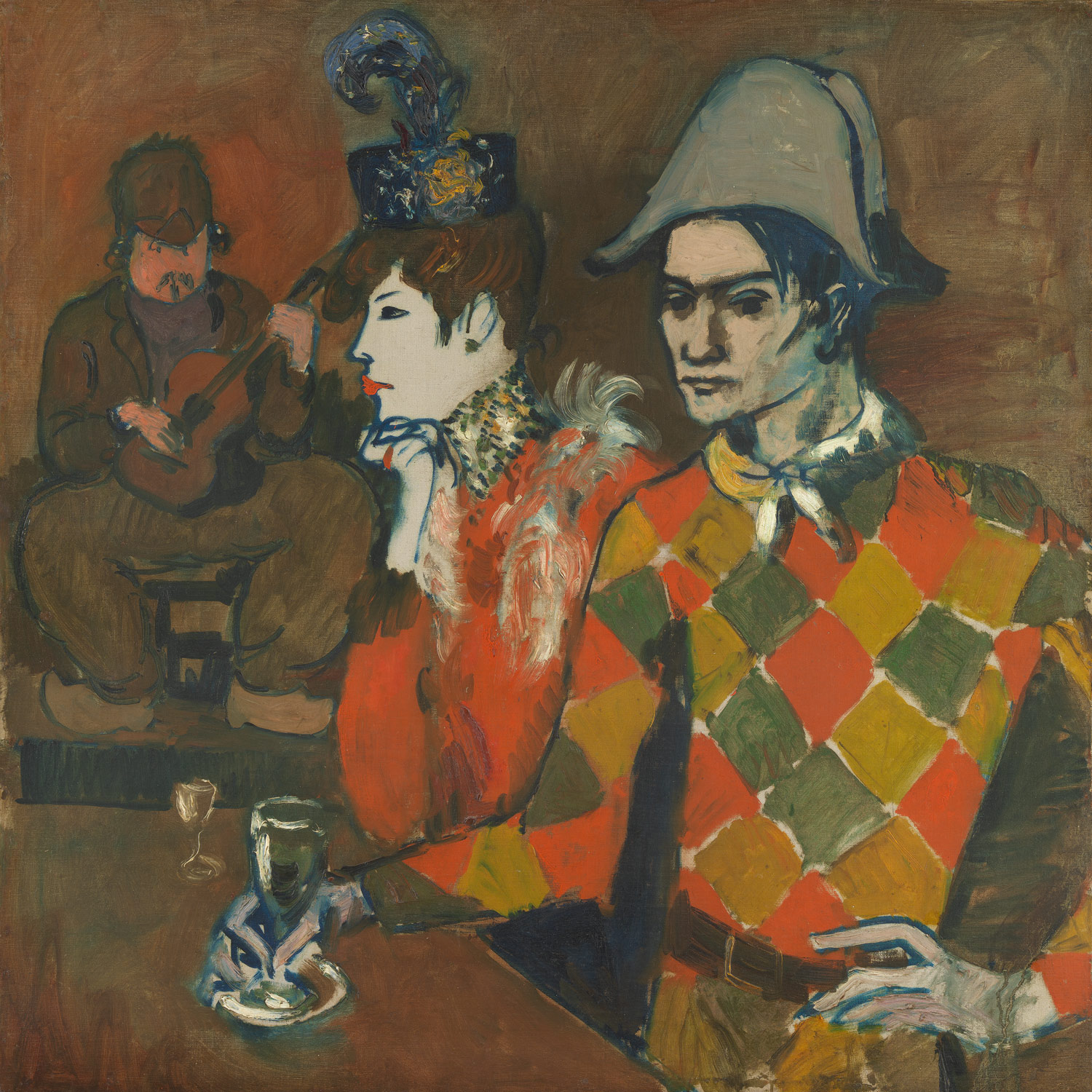 Paris, as well as staying the same in so many ways, is also changing rapidly.  The prevalence of street art is one of the most noticeable changes.  A great deal of tagging, but also, among the ordinary, the extraordinary: 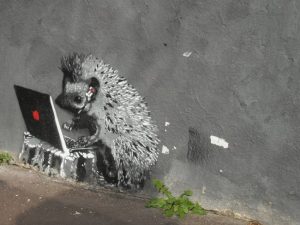 And what about that eclair?  Well, I’m well-known for my predilection for réligieuse, those wonderful chocolate or coffee cream-filled choux pastry concoctions, but decided I should try something different as I wandered round the Batignolles area which seemed to have a delightful bakery on every corner.  Green is one of my favourite colours and the brightness of this pistachio eclair seemed to be calling to me.  It was one of those moments where, as a Frenchwoman I know says, “time stops on your tongue.”

1 thought on “Paris in the Autumn – DADA, Punk and Pistachio Eclairs”