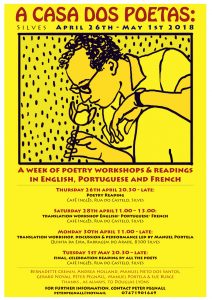 I’ve just returned from my most recent poetic adventure in the beautiful Portuguese town of Silves as a participant in poet Peter Pegnall’s A Casa dos Poetas.  Peter has been running this venture for a number of years and it was an absolute pleasure to be included.  It’s basically a residential writing course but with a key difference,  as one of Peter’s main aims is to ensure that the local community is aware and involved.  We spent quite a lot of time at the wonderfully welcoming Café Ingles where, on the pretty roof terrace,  Andrea Holland gave a thought-provoking workshop.   The red-brick Moorish castle loomed above us, birdsong filled the air, the scent of mimosa wafted on the breeze, we could see orange groves and yes, it was all quite ridiculously poetic…

From 700-1200 AD Silves was a Moorish stronghold and the remnants of the city walls these days are proving very popular with nesting storks.  The storks were a joy, the most spectacular nest was the one on the old Communist Party HQ complete with hungry storklet and I absolutely fell in love with the series of nests on the ruined pillars of a house down from the Café Ingles. 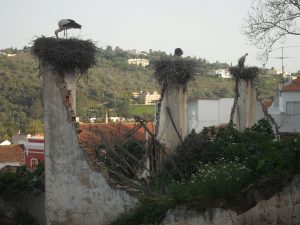 One afternoon I sat by the river and counted 12 storks wheeling overhead, a sight to behold. 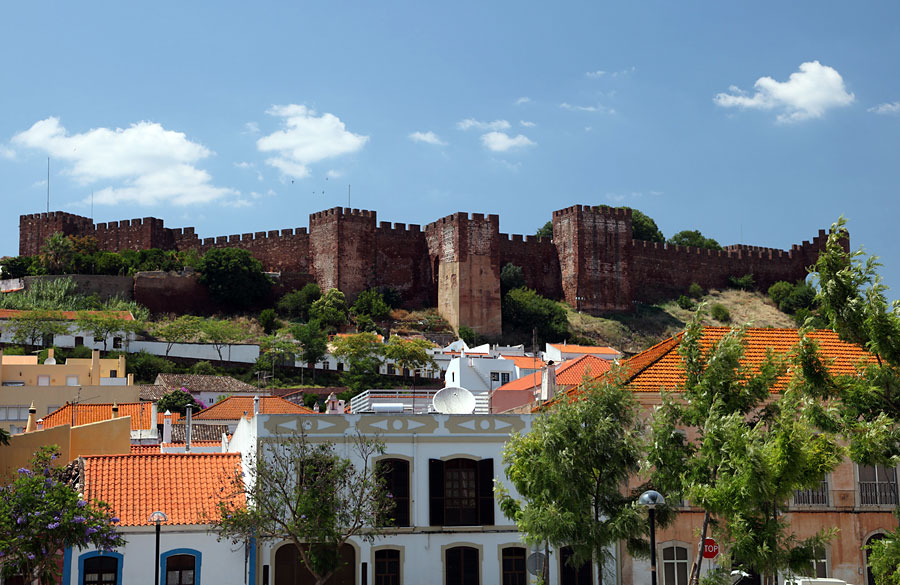 The Café was also the venue for a couple of poetry readings where we got to hear the strong and varied voices of the different participants.  We were extremely lucky to have Gérard Noyau with us throughout.  He translated some of our poems into French and it was fascinating to experience the translation process and be able to perform one of my poems in a different language.  Gérard’s father was René Noyau, the celebrated Mauritian surrealist poet, and he performed some of these poems too, with Peter reading the English translations which he and Gérard have been working on so meticulously. The Café was also the venue for a great workshop with Manuel Neto dos Santos, a Portuguese poet with eight collections to his name.  We listened to him read one of his prose poems and then roughly translated it with his help.  Once we had the bare bones we were able, in groups, to transform it.  Our aim was to make it sound as poetic as possible and as close to Manuel’s vision as we could.   It was a magical exercise and gave us all a real insight into the translation process, notoriously tricky when it comes to capturing the essence of a poem.  One of my recent discoveries is a collection of Moniza Alvi’s translated versions of Jacques Supervieille’s poems, Homesick for the Earth.  She spent literally years working on each version and they are beautifully crafted.  I find the whole question of poetry translation fascinating, including the question-marks over who has created the poem as the translator is often transforming ideas into words which are impossible to literally translate and adding their poetic voice into the mix.

I realised, to my shame, that not only were my language skills being sorely tested (I could read a little Portuguese thanks to a knowledge of Spanish, but the pronunciation was a real challenge) but I also knew nothing about the country which was hosting me so graciously.  At one point we had a talk from a longstanding local resident and headteacher about what it was like to have been a young man during the final days of the Salazar dictatorship and the Carnation Revolution of 1974, the anniversary of which had just taken place as we arrived in Portugal.

Someone who lived through the early days of Salazar’s regime was Fernando Pessoa and, towards the end of the course we had a fascinating study day on Pessoa, led by Manuel Portela from the University of Coimbra.   As well as being a superb linguist, translator, poet and scholar with wide-ranging academic interests and qualifications, Manuel is an expert on digital literature and is creating an interactive, multilingual, digital archive of Pessoa’s The Book of Disquiet  which will eventually include creative responses to Pessoa’s writing.  This means you’ll be able to enter the archive as a reader, writer, editor and translator.  We were the guinea pigs for the writing phase of the project, taking phrases from some Pessoa extracts and using them as a launching pad for our own pieces.  I did not know Pessoa’s work before and it opened up a whole new world for me.  Pessoa wrote under his own name, but also used approximately one hundred and thirty six other names of which several were fully developed heteronyms, including Alberto Caeiro, Ricardo Reis, Álvaro de Campos, Barão de Teive, António Mora, Vicente Guedes and Bernardo Soares. Heteronyms are an extraordinary concept, behind these names were fully-imagined authors, each with a distinctive voice, persona and opinions.  He began creating these heteronyms from a very young age.  The Book of Disquiet is a fragmentary project, it has no narrative, each text begins in the concsciousness of the moment and much of it was written in cafes by Bernardo Soares, one of Pessoa’s heteronyms.  Manuel’s digital version of the book means that it can be read in different ways which reflects how the book was discovered – pages and pages of disordered and fragmented writing in a trunk! Pessoa’s life, interests and writing could fill pages and he only lived to the age of 47!  A mysticist interested in astrology, the occult, Neopaganism, rosicrucianism, theosophy, the list goes on.  Pessoa spent some time in South Africa as a child and was fluent in English.  He once dreamed of becoming an English poet in the romantic tradition. 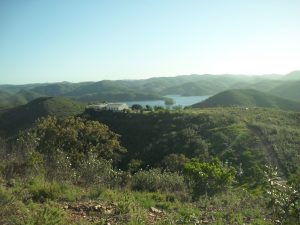 Our venue for Manuel’s workshop was the Quinta da Eira where five of us were fortunate enough to have been staying for the whole course.  This solid farmhouse, around 9km from Silves, with its resident dogs and cats and beautiful terraces overlooking the hillsides and lake was like staying in a living postcard.  I got out and about as much as I could into the surrounding countryside, walking, thinking, taking photos.  Whenever we went out for walks one of the farmhouse dogs would accompany us. 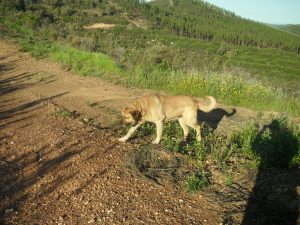 Simao was my companion on one walk. For the most part he waited patiently while I examined each beautiful wildflower but sometimes he got bored and gave me a hefty nudge.  One night, coming up the steep track in the dark a wild boar and her piglets ran across in front of the car, they were no bigger than kittens with crazily curly tails.   The landscape was immensely inspiring and I wrote the following poem to try to capture it:

a dog with a bear’s long bones

a perfect freckle on each white petal

the heady dart of a swallow

here, it is easy to forget

easy to believe in alternatives

it will be brief

Peter and Andrea led some brilliant poetry workshops on voice and persona which helped enormously with the Pessoa study day and were very thought-provoking.   I also led a workshop one afternoon, designed to take participants out of their comfort zones and, despite the fact that we were on the lovely terrace at Quinta da Eira with distracting views in the sunshine, everyone rose to the challenge magnificently!

All in all, a stunningly successful venture and my brain is still trying to process everything we learnt.  What has stayed very much in my mind is that, apparently, poets in Portugal are revered and respected, quite right too!  Pedestal over here please! 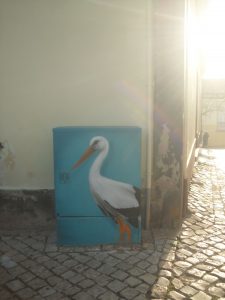 1 thought on “A Poetic Adventure in Portugal”