I’ve had some lovely responses to my blog about poetry in unusual places.  I’ve been to quite a few talks on the power of poetry recently.  One very interesting debate was led by Briony Bax (Editor of Ambit Magazine) at the Aldeburgh Poetry Festival where the theme of poetry as a catalyst for change was explored with George Szirtes and Ralph Webb giving fascinating insights into poetry and revolution and the impact of social media on poetry (and vice versa!).  Here’s another interesting site on guerrilla poetics to enjoy: 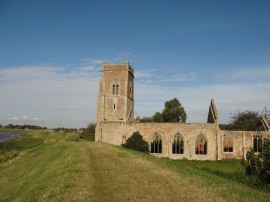 This month I’m saying a fond farewell to West Norfolk as we move definitively to East Runton.  In the decade I’ve lived in King’s Lynn it occurred to me that most of my walks have either been by the coast or along rivers.  The Fen Rivers Way is one of my favourites and the section we do most often, Downham Market to King’s Lynn, is bleak and empty with very few, if any, other walkers.  Instead there are herons galore, standing at sentrylike intervals along the bank, and a family of seals who have colonised the sluice gate just as you reach the industrial edge of King’s Lynn.  The other section I do regularly is Waterbeach to Cambridge, the polar opposite – it’s like the Regent’s Canal towpath, full of runners, walkers, dogwalkers and cyclists.  What both lack, though, are benches, especially now the one by the ruined church at Wiggenhall St Peter’s has disintegrated! You can read Patrick Barkham’s lyrical account of this walk for The Guardian at https://www.theguardian.com/travel/2016/jul/07/norfolk-fens-rivers-way-cambridge-walking-holiday

The Fen Rivers Way follows the Cam and then The River Great Ouse.

I’ve just finished The River by Olivia Laing which follows the course of another Ouse, the one in Sussex in which Virginia Woolf took her life in 1941 wearing her heaviest coat, pockets full of stone.  It’s a depressing but fascinating book, Laing had just split up with her partner and her sense of anxiety and unease permeates every step as she walks alone in deep contemplation.  Occasionally Laing launches herself into the water to cool down and revitalise, these are disturbing moments during which she seems to have little regard for her safety and I held my breath until the next page, willing her to survive.   I’ve just reviewed Elizabeth Jane Burnett’s Swims (Penned in the Margins).  This powerful collection is a long poem documenting twelve wild swims across the UK’s rivers, lakes and seas.  Each poem is an experiment, pushing at the page, seeking freedom from its confines and I thoroughly enjoyed the inventiveness of it.   The thought of wild swimming entrances me and I’m even thinking of investing in a wetsuit for all year round sea swimming.  Swimming is where I plan my writing workshops and solve poetic problems – that tricky last line, what to leave out, the perfect twist for a line, the revelation of the ideal form to fit the content of the poem – it’s as if the beat of my arms and legs sets up a problem-solving rhythm.

I’m currently reading Norwich-based poet Richard Lambert’s new poetry collection The Nameless Places (Arc) – the collection ends in a sequence following a journey made along the course of a river from its source to its mouth. The title of the collection comes from the poem“The Wind” with its first line Coming up the estuary over the nameless places/ evoking, for me, walks I used to do alongThe Wherryman’s Way which runs by the River Yare from Norwich to Great Yarmouth with its big skies, waste ground and marshes. 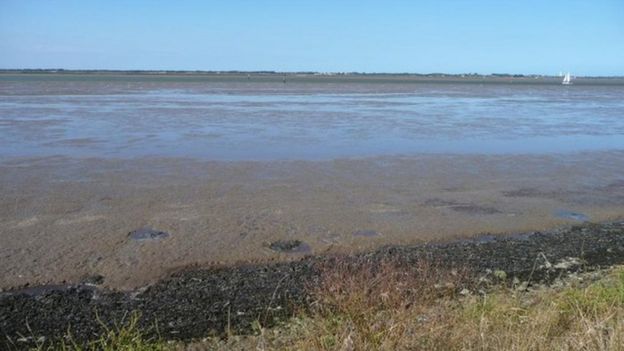 Another favourite river walk is the Nar Valley Way. We’ve walked from Gressenhall (near the source) back to Narborough several times and have done the Narborough to King’s Lynn stretch too.  It’s more valley than river, although the river does pop up in surprising places along the way.  My favourite stretch is Narborough to Castle Acre.  Early on in the walk there’s a distant view of Narford Hall, seat of the Fountaines, where in the 1960s Andrew Fountaine, founder member of the BNP created an annual Aryan camp.  Or perhaps we’re better off remembering Margaret Fountaine of South Acre, diarist, lepidopterist and explorer in an era (1890s onward) when this was just not “done”, especially as it seems that the much-travelled Margaret may have had an “affectionate relationship” with her guide and trasnlator of 27 years, Khalil Neimy.  The large number of monastic ruins strewing the countryside are a great feature of the walk, all found near clean flowing water to meet the monks’ needs.  Walking past The Stag at West Acre and then down to the Fords, you get tantalising glimpses of the ruined priory of West Acre before crossing the water meadows and coming out at the ruins of Castle Acre, a Cluniac Priory dating back to 1090. 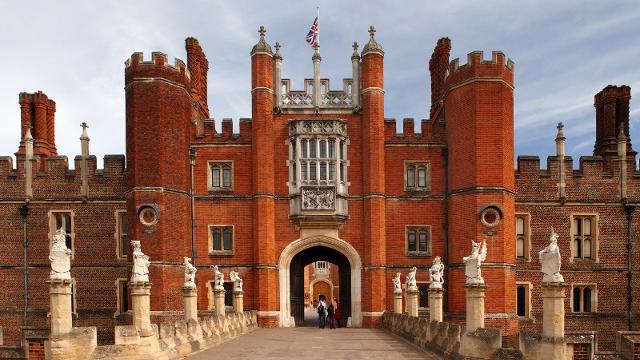 I guess it’s no suprise that I’m so attracted to rivers.  My father was a boatbuilder and I grew up in Kingston-upon-Thames so the river was always a strong presence through my formative years.  At the end of the road where I lived for most of my childhood was the Hogsmill, a tributary of the Thames which, one memorable evening, overflowed – I remember my mother furiously sweeping it back under the door.  Kingston was well situated for visits to Kew Gardens on the bus with twopence entry posted in the honesty box.  I would walk along the Thames to Hampton Court where under sixteens could get in for a couple of shillings.  It’s probably here that my love of history began as I devoured Jean Plaidy and stood with my eyes closed in the Haunted Gallery where Catherine Howard is said to have begged Henry for her life, hoping to hear her cries. 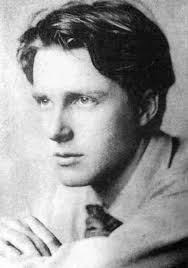 It was in Richmond Park that I first independently discovered my love of poetry.  At school we did Charles Causley, Ted Hughes and the war poets and I began my longest poetic crush ever – Rupert Brooke.  I still have my battered copy of his complete works.  I used to take this to Richmond Park with a friend and a picnic and we would learn his poems off by heart and test each other over bread, paté and cheesecake.  He probably wasn’t the best poet England has ever produced but his death from septicaemia in 1915 at the age of 27 on a troop ship bound for Gallipoli  has preserved him for all time as the poetic golden boy,martyred by the First World War.  There’s something about his encapsulation of the English idyll which I, uncharacteristically, love.  One of the first plays I ever saw was a Brooke tribute, Sweet Wine of Youth, at the Overground Theatre in Kingston ( when it had a rather dodgy temporary home in what seemed to be converted public toilets round the back of C & A!). 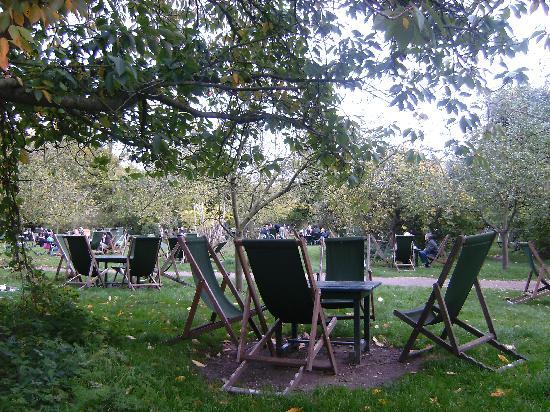 This means, of course, that another of my favourite walks is Cambridge to Grantchester,  along the Granta and through the watermeadows.  At the height of summer there’ll be students leaping in the river to cool off, others will be punting and, last time I went it was so hot a whole herd of black cows stood stoically in the shallows, blowing through their noses like bulls.  There’s always time for a pot of tea in stripey deckchairs on the lawn at the Orchard Tea Rooms dreaming of all those who once drank here.  The Orchard was first planted in 1868 and became a tea garden by chance when some Cambridge students turned up in 1897 and asked to be served tea under the apple trees.  The Stevensons who owned Orchard House then started taking in lodgers, one of whom was Rupert Brooke.  He moved out there from Cambridge in 1909 and commuted to the University by canoe.  Other visitors came out to see him, and were called the “Neo-Pagans” by Virginia Woolf.  They also included E.M. Forster, Bertrand Russell, Augustus John Maynard Keynes and Ludwig Wittgenstein.  Alan Turing also enjoyed tea here!

And, of course, there’s TV series Grantchester based on James Runcie’s books.  I’m a great fan of James Norton, he scared the bejesus out of me in both series of Happy Valley, and also a great fan of detective series, but somehow I never took to the slightly Miss Marple/Midsomer Murders vibe of Grantchester”.  Don’t get me wrong, Norton looks great as charming vicar Sidney Chambers.  In fact, don’t you think he looks uncannily like Rupert Brooke?! The leafy village features strongly in the series, as do the appropriately costumed local residents.  It’s all a gorgeously appropriate cliché of Englishness, Betjeman would have loved it – in fact he must surely once have had tea at the Orchard Tea Rooms alongside his compatriots!

And if tea really isn’t your tipple of choice then head back to Cambridge and check out Hot Numbers on Trumpington Street, just past the Fitzwilliam.  This roastery and cafe really does know its beans, specialising in single origin coffee. I’ve had the most layered and tasty coffees ever here so do give it a try!