Last September we spent 10 days in Berlin. It wasn’t my first time in this city and it certainly won’t be the last as it’s become one of my favourite European destinations. Every step you take feels as if you are walking on history, our history, the events that changed and shaped our world, changes which are still in evidence today.

I love the fact that Berlin is not a pretty city. It has some wonderful buildings and very pretty squares, but overall it has a gritty, urban, streetwise feel that doesn’t try to pander too much to mass tourism if you exclude the fact that Berlin has a museum on everything (Currywurst Museum anyone?), sometimes several (The Wall)…

And, of course, it’s a wonderfully cinematic city. As we walked around I thought of the angels in Wings of Desire, Wim Wender’s dreamy black and white depiction of West Berlin just before the Wall comes down, with Bruno Ganz as an angel who wants to be human, and Peter Falk (aka Columbo) as an already fallen angel…

One of the angels accompanies an old man as he wanders through the rubble and bare ground near the wall which can’t be built on (this site became the super futurist Potsdamer Platz, replacing a bombed square of the same name).

It’s a city of so many faces – Red Berlin, Hitler’s Berlin, Weimar Berlin, Bauhaus Berlin. In Aeon Flux, the sci-fi film starring Charlize Theron, the buildings look like an expensive Hollywood film set, but they were all filmed on location in Berlin, some old, most new – futuristic visions which mock Hitler and Speer’s dreams of a classical city.

We go on a guided walk to hear more about the extraordinary grafitti that covers any spare inch of blank space in the streets.

Suddenly, there, on Schlesischestrasse is  a complete blast from the past.  Barbie Deinhoff’s Fugidivafreundschaftclub. I visited this place years ago but feared it was one of those Berlin pop-ups (bars, cafes, squats) which are notoriously short-lived. But here it is, looking just the same although daubed in several more layers of thickly painted graffiti. I was so struck by this club that I wrote a poem about it – it’s in Kreuzberg, very near where the Wall would have been.

The Divine Decadence of the Fugidiva Freundschaft Club, Berlin

Where East met West there’s a street of bars :
time-capsules of Wall-era deco.
At the fifth and final portico,
as the moon starts to sink,
a transvestite doorperson fondles us barwards.
Grubby Barbies impaled on the walls;
spangly pink t-shirts on plastic hangers
dangle like tarty chandeliers
in a smoky wonderland of pierced punks
perched on children’s chairs
and purple funfur ottomans.

There is no more vodka.

She drinks her tequila like a drunken angel,
laughs, and slowly licks my palm, and then
we, too, are divas for one fugitive night,
sealed with an unrepeatable kiss.

I insist on going to the street where the Coca Cola sign unfurls in Goodbye Lenin. Chris bravely shoots off with the camera to crouch on various traffic islands and gets a great shot. 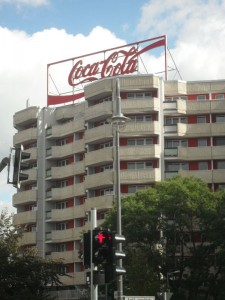 I love this film, it’s so moving. Alex’s mother has a heart attack and goes into a coma just as the Wall comes down. She regains consciousness in a new Germany but mustn’t receive any shocks or she will die. Her son recreates East Berlin all around her, to save her life, for she has been a staunch but humane supporter of the regime. In tribute we go for a daytrip to Lübbenau so I can buy some Spreewald gherkins;  Alex searches the newly Westernised supermarkets for these as his mother is craving them, but ends up filling an old Spreewald jar with Western gherkins.

I start writing several poems but none of them are any good. I often write about places I’ve visited weeks or months after the event, letting the places ferment and settle until a line or two starts to rise to the surface.   And that brings me to the big question – what stimulates us to creativity? Silence? Coffee? Pots of tea? Nature? Absinthe!? I write best in cafes, it’s important for me to have a background buzz and to be able to observe everything that’s happening – I can spend all day doing this, ordering endless coffees and pots of tea (just as well given my upcoming Paris project of capturing Paris’s cinematic and literary legacy through poetry, as well as my decades long personal relationship with this city). My favourite local haunt is Peacock’s Café in Ely (around 100 loose-leaf teas to choose from…) – I’ve written so much there and the poems I write there all seem to get published – my lucky café! http://www.peacockstearoom.co.uk

Chris’s obsession with the third wave coffee movement (cafes which have a close relationship with growers and who brew using either aeropress or pourover methods which results in astoundingly tasty coffee) takes us to the wonderful Bonanza, right near the Mauerpark and, more importantly, right near the fantastic Mauerpark fleamarket where we discover Charity Children singing their wistful songs in what used to be no-man’s land in the Mauerpark. 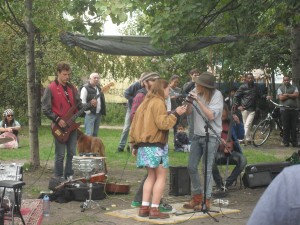 Bonanza is too cool to write in, as you can see from the minimalist, slightly mad professor lab feel in the picture below. I’m too short to be comfortable on a bar stall and narrow counter arrangement and can’t effectively drink a coffee without spilling it, let alone wield a pen successfully, but it’s a great place and the staff were delighted at our enthusiasm for their coffee, plying us with the very expensive coffee rejected by a departing customer.

I’m still bringing up lines of possible poetry and am hoping to write a prose poem sequence about Berlin. Prose poetry has been an absolute breath of fresh air for me (move over Baudelaire!) and for the past two or three years I’ve been exploring the possibilities of this form and falling more and more in love with it.