My year of working harder than ever on my own poetry, thanks to my Arts Council grant, is starting to wind down. So far this year I’ve written nearly forty poems which would be four years’ worth of work at my usual, non-funded, pace!  I have delivered all four “feature-length” Inspired by Film workshops connected with my ongoing exploration of how film can speak to us poetically.  I also delivered a shorter version at the National Association of Writers in Education (NAWE) conference where I hooked up with my two mentors on the Arts Council project, Maura Dooley and Heidi Williamson, who are also the judges for the Inspired by Film Poetry Competition.  There are more details of the project on my website – the final event is going to be a big open-mic celebration at the Picturehouse Cinema in Cambridge for everyone and anyone where we’ll hear the winning poems from the competition entrants and many more (30 January – pencil it in now!).  We all had a fantastic weekend at the conference – there were so many fascinating presentations and workshops and, quite frankly, what’s not to like about spending hours talking to other people who love writing and the writing world as much as you do? 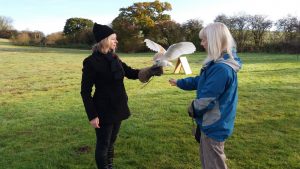 One of the highlights was a falconry demonstration where we met Charlie the Harris Hawk, Barry the Peregrine Falcon and Molly the Barn Owl.  The conference took place just outside Stratford-on-Avon and although most of us were too busy to go into the town (I have to say the heated swimming pool at the hotel was a big distraction too…) at least hobnobbing with raptors and wearing a big leather gauntlet made me feel as if I’d gone back to Shakespeare’s time – I rather fancy myself with elaborately embroidered sleeves accessorised with a merlin… 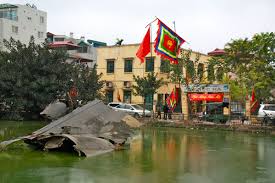 So, my burning question to you this month is where is the most unusual place you’ve eaten or drunk?  I thought my answer to this might be drinking Vietnamese coffee at a tiny stall by the shores of the very urban Hoan Kiem Lake in the middle of Hanoi, watching elderly ladies doing t’ai chi; or maybe having Tibetan momo dumplings at the Trades Club in Hebden Bridge where the excellent Lhamo’s Kitchen provides tasty lunches; or maybe tea and cake on a barge on Regent’s Canal.  Or more exotic still, having Christmas dinner in the desert in Rajastan with the camel I’d been riding snorting in a hideous manner nearby.  I didn’t realise how close we were to the Pakistan border until our guide insisted on giving the lion’s share of our quite meagre meal to two men who turned up out of the blue.  They turned out to be heroin smugglers so it was quite a relief that we’d all been terribly British and scrupulously polite…  I have fond memories of being in Kerala and eating at railway stations where the dhal and rice were served from buckets in a massive canteen with no cutlery in sight.  I just couldn’t get the knack of rolling my rice and lentils into a shapely ball…  Then there was the unexpected St Anne’s Well Cafe on the slopes of the Malvern Hills which did vegetarian food and even vegan cakes.  Breakfast at the Troubadour is also one of my favourites, it hasn’t changed since the 1960s and I always expect Bob Dylan to stroll in looking a bit hungover…Then there was the picnic we had by Golden Gate Bridge (I insisted on stopping at more or less the exact spot where Kim Novak as Madeleine Elster plunges into the Bay in Hitchcock’s Vertigo… )– tomatoes, hummus, tortilla chips, bright blue sky, ochre bridge and a sudden pod of dolphins arcing by… 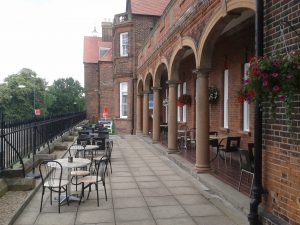 By far the most unusual culinary experience, however,  was on a recent trip to Norwich when Chris and I visited H M Prison in Britannia Road for no other reason than to have a mug of tea…  The prison is located in one of those gorgeous red-brick Victorian facades which seem to belie what goes on inside (workhouses etc…) and has the most amazing but deeply ironic views over Mousehold Heath and across the City.  And now you can enjoy the view  without having to bring your own flask and sandwiches as since 2014  the Café Britannia has been operating right at the front of the prison complex in the old barracks:  shabby chic  interiors, a terrace with great views, gorgeous cakes, great lunches, elegant afternoon teas, British bistro meals in the evening and bargain-priced Christmas dinners.  The staff are described as “low-risk inmates” who want to learn new skills and improve their lives.  I have to say that we received some of the best customer service we’ve ever had and there was even a slightly surreal moment when the cashier gave me one of the new five-pound notes in my change and commented that they looked fake…   http://www.cafebritannia.co.uk/ 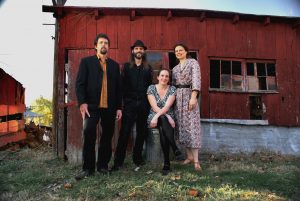 Another highlight of our trip to Norwich was seeing dyanmic Appalachian tunesters “Furnace Mountain” at the Norwich Arts Centre.  The group were from Shenandoah in Virginia (am I the only one who weeps through the Gregory Peck civil-war epic Shenandoah?  What is it about place names in other countries which makes them so much more resonant than the familiar – Shenandoah, Hull, Ipswich, hmmm…).  I’m a huge fan of American roots/folk and Americana and some of the music the group played reminded me of the excellent soundtrack to the Coen Brothers’  O Brother, Where Art Thou.  I often use this film on my Road Movie courses.  It’s a great example of a road movie which doesn’t feature many roads (on a road movies course taught by a non-driver, I always like to add!) and it’s also a re-telling of the story of Ulysses which brings me to one of my favourite recent poems, Norfolk-based Laura Scott’s brilliant “The Dogs in Greece are Different” http://poetrysociety.org.uk/poems/the-dogs-in-greece-are-different/which is a very clever take on the immigration/Greek crisis and references Ulysses’ faithful dog at the end.   There really are no new plots under the sun, just the most amazingly creative and different ways of re-telling those universals and making us engage with them and re-think them  in myriad new ways…

7 thoughts on “A Smorgasbord of Experiences…”