My craving for Paris has finally calmed down after five weeks back in the UK, so I clearly fell hook, line and sinker for the old flirt yet again! My wonderful Paris flat landlord, Jonothan Green (who knows all there is to know about slang, check out Green’s Dictionary of Slang – fascinating…) reliably informs me that the black guys on Rue Chateau D’Eau are not dealers (see May blog), but touts for the many African hairdressers in the locality – who says truth isn’t stranger than fiction?! 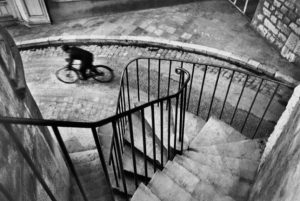 Understandably, I’ve been writing a lot about place recently and I’ve been contemplating whether we remember places in black and white or colour. This has probably been further fuelled by a visit to the fantastic Henri Cartier-Bresson exhibition at the Sainsbury Centre for Visual Arts in Norwich. It’s a really well curated exhibition, spacious and meditative with peculiarly haunting images: boules players discussing strategy in the snow, ancient prams full of wartime finds, a photographer taking a group of gypsies, the heartbreaking faces of mourners after the Rue de Charonne massacre in the 1960s and this wonderful image of a cyclist and stairway. Strangely, when I think of Paris, the colours are very muted, almost wintery, in my mind. Other places appear in my memory in quite clichéd colours, so India is saffron and bright pink and Mexico memories are in earthy, sandy, almost terracotta colours. Try this yourselves, poets, it’s a good exercise – the colour of memory… It reminded me of all those films which play with the idea of black and white and colour – A Matter of Life and Death (where heaven is black and white and earth is in colour), Stalker – a Russian re-telling of the Wizard of Oz combined with the marvellous Strugatsky Brothers sci-fi novel Roadside Picnic – here the Zone is in colour (where your dreams come true) and the contaminated Russian industrial-scape is, of course, black and white. 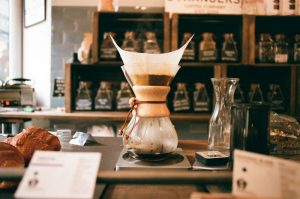 And if you do happen to be passing through Norwich, check out two fabulous cafes with their own roasteries and excellent craft coffee. Little Red Roaster is at 1a St Andrew’s Street, also 81b Grove Road and they have a good sized stall on the market too (52/53). Strangers Coffee Company on Dove Street are the new kids on the block and at present are for takeaways only. If you fancy tea (and cake!) the rather eccentric Biddy’s Tea Room is good for people-watching and writerly inspiration – tucked away on Lower Goat Lane, it’s got a slight air of the Mad Hatter’s Tea Party and has a monthly bake-off and a clothes swapping evening, both of which sound intriguing! 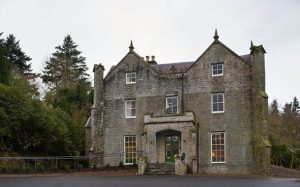 I have just returned from an Arvon residential writing course taught by the most inspiring and generous poet-tutors one could possibly hope to have – Caroline Bird and Kei Miller. Kei is a Jamaican poet and we did a lot of work on ideas around place in his sessions, fitting in beautifully with my current obsession (he was very patient when I started every sentence with “In Paris…”); while Caroline stretched our perception of what poetry can do to an alarming and quite brilliant extent. All this took place in John Osborne’s old house, The Hurst, in the rolling English countryside near Clun. Heaven! 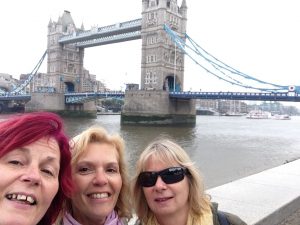 London, now there’s a place I always see in sepia… And most colour-appropriately I stayed there recently at an Airbnb in Bermondsey with two friends, Claire and Monika, who I hadn’t seen for around twenty-five years. We’d all been in Israel together, kept in touch for an intense seven or eight years and then drifted apart. We had a great weekend of catching-up and it felt as if we’d seen each other weeks rather than years ago. 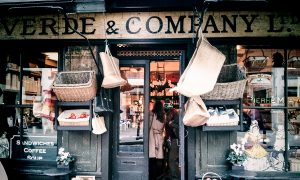 Verde and Company Ltd – gorgeous old-fashioned café and deli in a restored Georgian building opposite Spitalfield Market in Brushfield Street. It’s owned by writer Jeannette Winterson who wanted to keep the traditional spirit of the area going. It’s a member of the Slow Food movement and is everything that the big coffee chains are not… Inside there’s a big communal table, a few tiny tables and lots of old Georgian silverware, outside there are benches. The coffee is excellent and there are walls of translucent and expensive marmalade to reflect what little light sneaks in. I love this area, it celebrates diversity from the Huguenot weavers who escaped persecution, the Irish weavers escaping famine, Jewish settlers, Bangladeshis in Brick Lane – it’s one of the liveliest, most happening areas of the capital.