So, what can you expect from this blog? Thanks to a very generous grant from the Arts Council I’ll be spending five weeks in Paris researching and writing a poetry collection which explores Parisian film locations as well as the culture and cafes of Paris, so there’ll be at least a couple of postings from there as well as postings about zombie encounters in Hebden Bridge, dodgy divas in Berlin, City Lights in San Francisco and so on. And prepare to share our (husband Chris will have guest appearances) increasing obsession with the third wave coffee experience that is taking over the coffee-lovers’ world.

I’ll be posting on the last day of every month and if you join me I can guarantee you’ll increase your dvd collection, your taste for coffee and café culture in general and pick up some great urban travelling tips. And I’ll be sharing my poetic finds as well as my own poetry, written on the move. Poets (I’m sure I don’t speak just for myself here…) are often found in cafes, scribbling on plain serviettes with borrowed biros as we live up to our absent-minded reputation and realise that all those gorgeous notebooks we got from supportive friends for Christmas are still under the tree… 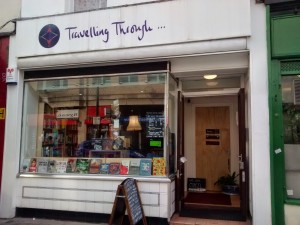 And finally, a place which brings everything in this blog together – the marvellous Travelling Through Bookshop www.travellingthroughbookshop.co.uk in Lower Marsh Lane near Waterloo which has shelf after shelf of books about travel, a great café with fabulous cakes and really good coffee and that’s not all! It regularly hosts workshops organised by the fantastic Hercules Editions www.herculeseditions.wordpress.com. I recently did a day workshop with brilliant poet and tutor Claire Crowther on writing a horror poem which included a screening of “The Cabinet of Dr Caligari”, one of my favourite German Expressionist films. So next month’s post has to be a focus on Berlin!