“I am a camera with its shutter open,” states Christopher Isherwood in A Berlin Diary  part of the collection of short stories (Goodbye to Berlin)  which are the basis of the film I Am a Camera (starring Laurence Harvey and Julie Harris with the wonderful Shelley Winters as Isherwood’s landlady  – one day I want to teach a whole session on movie landladies!) and thus to the stage show and film Cabaret.  What did Isherwood mean?  He continues, “…quite passive, recording, not thinking.  Recording the man shaving a the window opposite and the woman in the kimono washing her hair.  Some day, all this will have to be developed, carefully printed, fixed.”  It’s a great analogy for the raw material a writer collects,  a series of bulging notebooks are a feature of most writers I know.  Probably the best film I have seen this year and one which really connects with Isherwood’s ideas is Paterson, directed by the legendary Jim Jarmusch. 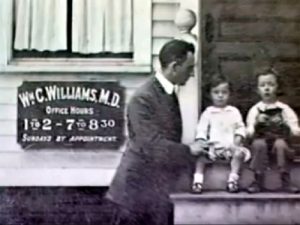 Paterson is  the town where William Carlos Williams was born (his epic five volume poem Paterson was written between 1946 and 1958 and was inspired by Joyce and Eliot). Williams practised medicine, wrote prolifically and is eminently quotable.  He was the one, for example, who originally said, “It’s not what you say that matters, but the manner in which you say it.” He was writing at around the same time as Robert Frost, Wallace Stevens and H.D. and is usually associated with the Modernist and Imagist movement of this time.  Paterson is also where Allen Ginsberg grew up (see Daniel Radcliffe as the young Ginsberg  in the 2013 film Kill Your Darlings).  In Jim Jarmusch’s film, Paterson is a poetry-writing bus driver played by Adam Driver who has lived and worked all his life in Paterson, New Jersey.  The film follows a week in Paterson’s life (both human and town).  Adam Driver’s character is a poet very much in the vein of Frank O’Hara and the New York School (and the Beat poets and Walt Whitman…).  His life is totally ordinary but he processes his days through the filter of poetry, turning the ordinary into the extraordinary through his beautifully selected words.   It is actually Ron Padgett’s words which are used throughout (superb poet of the New York School tradition) – they appear on the screen, slowly, thoughtfully as Paterson thinks and writes them.  It’s a mesmerising experience and one which illuminates the power of good poetry.  Quite often I will read a poem and think “So what?”  It’s a response to something which is either untransformed and too ordinary and anecdotal or to something so heavily transformed that it no longer contains meaning for anyone else apart from the writer themselves.  Go and see Paterson, watch and learn! 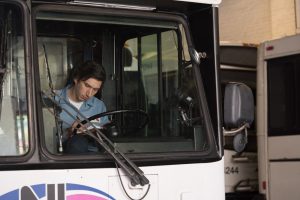 Adam Driver’s character  is beautifully placed to eavesdrop and observe from his bus-driver’s perch.  Frank O’Hara wrote lunch poems, minutely observing the New York life around him in his breaks.  I tend to write better after a spell of walking or swimming – both these activities involve regularity and repetition and draw the words from my mind in the patterns and shapes I need.  It’s not surprising, for surely we walk and breathe in our daily lives to the cadence of Shakespeare, our hearts beating to the unstressed/stressed rhythms of iambic pentameter?   Anything which puts us in touch with these natural rhythms can help to bring out our words in a more pleasing way.  Does coffee raise and change my heartbeat, making it more arrhythmic ?  Is this what makes my writing more erratic and experimental at times?  Hmmm…

And on this subject, I’m reading a fantastic book at the moment, Lauren Elkin’s Flâneuse 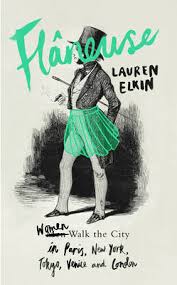 which looks at urban walking from a female/feminist point of view.  Perhaps this is why I wrote so much during my five weeks in Paris.  I rarely stopped walking, becoming quite Dickensian in my need to tramp the streets and observe.  These resulted in five Flâneur poems but also meant that I had a great deal of raw material which I’m still only part-way through processing.  Recently I’ve also returned to a favourite text, “Walking” by Henry David Thoreau, an activity he describes as one which “awakens the senses and the soul” although, of course, Thoreau walks alone in nature not shoulder to shoulder with his fellow humans in the noise and grime of the city.

Inspiration is everywhere and repetition and regularity are not enemies to creativity but their very basis.  Many of my poems are inspired by film and most of them are films I’ve seen time and time again but re-visiting them means I always see something new, just like the bus driver in Paterson, going along the same route but finding different ways in… 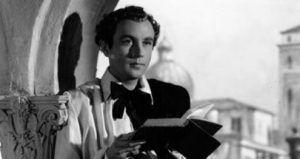 Lately,  I’ve been looking at films about poets in order to explore their lives and inspiration cinematically – biographies on the page can often be too dry and academic for my taste.  There’s Bright Star which looks at Keats’ life, and Howl which focuses on the Ginsberg obscenity trial in San Francisco and is a wonderful mix of anger, animation and groundbreaking literary history.  One I’ve always wanted to see is The Bad Lord Byron starring Dennis Price, (who, in Kind Hearts and Coronets played Louis Mazzini, the disowned heir who systematically and brilliantly kills all his relatives – so I’m sure this will be a winner when I eventually source it!).  I’m also  looking forward to seeing  A Quiet Passion, the biopic of Emily Dickinson starring the fantastic Cynthia Nixon (Miranda in Sex and the City).  This set me thinking about who I would want to play me in the film of my life, should anyone be foolish enough to take this commercial risk!  My top choice would be Kirsten Dunst – she’s feisty, clever, quirky and a fantastic actress but, should she be unavailable, then I would love to have the amazing Nicola Walker – I am so looking forward to the new series of Unforgotten in 2017.  Walker is an actress of great intelligence and integrity and would do any poet proud!  So, who would you pick to play you?!

Then there are films which contain poetry.  One of my favourites is Stalker directed by Andrei Tarkovsky.  It’s one of my desert island films – so strange and compelling – a sort of dark, Russian re-telling of The Wizard of Oz… There is one section known as “Stalker’s Dream” which contains beautiful poetry by Tarkovsky’s father, Arseny, spoken over a slow-moving sequence where the actor who plays Stalker lies in shallow water and the camera explores the bizarre and symbolic environment which contains him.    You can watch it here:

To conclude these meditations on poetry and film, I feel extremely privileged to have been selected as one of the ten poets to work on a collaborative poetic response to the extraordinary documentary film “Battle of the Somme” (1916).  We’re being guided by fantastic poet Simon Barraclough (his We’ll Always Have CGI Paris is one of my top cinematic poems – follow this link to see what I mean! http://www.poetryinternationalweb.net/pi/site/poem/item/26682/auto/0/WELL-ALWAYS-HAVE-CGI-PARIS ).  We’ll be showcasing our poetry prior to a screening of the film at the Cinema Museum in London on 4 February 2017.  Hope to see lots of friendly faces in the audience! 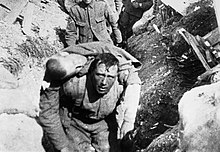 Sue is looking forward to teaching a session for North Norfolk Writers in September. A small supportive group who meet in Cromer and are always happy to receive new members.
Go here for more information
www.northnorfolkwritersgroup.com

Sue has a prose poem sequence,
Woman at War, inspired by Lee Miller’s photographs, in on-line journal
The Ekphrastic Review. This journal publishes poems which respond to artworks and poetry.
Scroll down to see Sue’s poem here:  www.ekphrastic.net