The Battle of the Somme 1916 — Film Screening and Poetry Performance 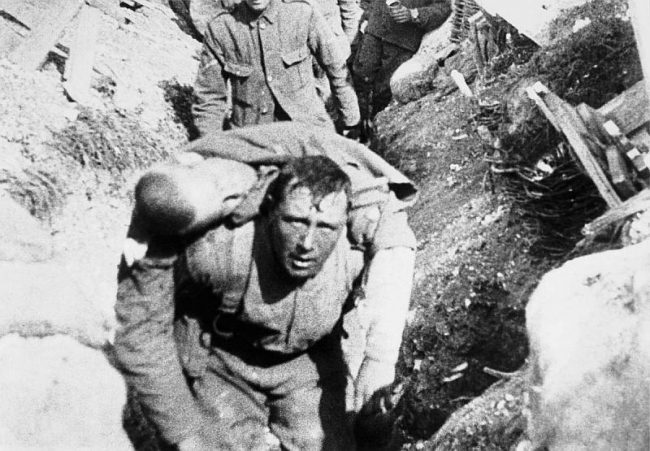 In December 2016 I discovered that I was one of the ten poets who had been selected by The Poetry School to work with renowned poet Simon Barraclough on a collaborative poetry project in response to the film “The Battle of the Somme 1916” which would screened after our poetry performance on 4th February 2017 at The Cinema Museum in London.   The other nine poets were Anna Kisby, Caroline M Davies, Chrissy Williams, Eleanor Penny, Jo Young, John Haney, Patricia Ace, Steve Kendall and Roy McFarlane.

This extraordinary film had been shot on location and the documentary footage changed the way the British public thought about the war and the way they thought about the cinema.   This was a masterful propaganda film thought to have been seen by approximately 20 million people in the first six weeks of its release.

After the initial euphoria of being selected had passed, I began to question my motivation.   Who was I, I wondered, to have the cheek to follow in the footsteps of all those iconic First World War Poets…   I soon realised that I was worrying unnecessarily — a 21st century response is very different, built on knowledge and understanding which can only come with hindsight, as well as an unfortunate awareness of all the other conflicts which followed the “War to end all wars…”

Our first meeting was on 19th December at The Poetry School in Lambeth Walk — we had come from all corners of the UK and had extremely diverse backgrounds and experience.   We got to know each other and watched the film together and then drew lots to find out which seven minute segment of the film we were to respond to — I drew “1” and felt initial panic and then relief — better to go first than to wait with increasing nerves, I reasoned.   Simon asked us to write poetic responses to our seven minute segment, but to also take a wider view and respond in any way we wanted to the film and its themes, however tenuous.

I was so excited and adrenaline fuelled by the session that I wrote my initial response on the train home and used this as the basis for my five minute performance piece.   The poems developed over the next few weeks and we posted on a group Facebook page, receiving feedback on our work and sharing our research and ideas.   Focusing on the Battle of the Somme was a strange but very enriching way of spending the Christmas and New Year period and by the 20th January deadline I was ready to let my poetry go…   My long-suffering husband endured nightly rehearsals and could probably have taken my place in the line-up if I’d been crushed by a lorry on the way to the Museum.

Simon did a fantastic job crafting the ten pieces into a coherent and cohesive script which we received around a week before D-Day, the 4th February. 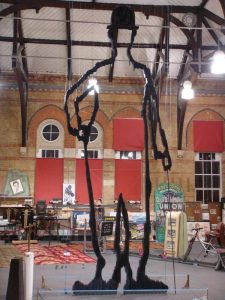 We arrived at The Cinema Museum at 10.30am.   Most people hadn’t been there before and were stunned at the beautiful and inspiring space that the old Workhouse Chapel provides, complete with outline sculptures of Charlie Chaplin whose mother had been one of the inmates of the Lambeth Workhouse.   The Battle of the Somme was the blockbuster hit of 1916 but Chaplin was also one of the most prolific film-makers in this era and many of his 1916 films would have been seen by the same audiences. 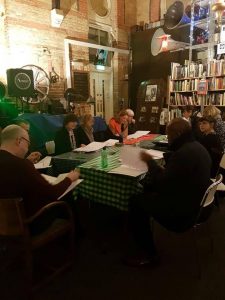 The ten of us assembled round a table with Simon and Julia Bird, The Creative Director of the Poetry School, for a first read-through.   It was amazing to hear everyone’s voices after so much virtual communication.   As well as the first five minutes of the performance my found poem “Lingo” which told the story of the war through the World War One Slang and language provenance had been chosen to intersperse the performance and provide a kind of clinical interruption and palate-cleanser.   It was fantastic to hear this piece spoken by so many voices, bringing it to life in a way I had never imagined would be possible.

After lunch we rehearsed the ending which had been brilliantly orchestrated by Chrissy and Simon — I was moved to tears at one point as we rehearsed our roll-call of those who had died.

We moved on to a full performance with much adjusting of microphones to our different heights and much practising of getting on and off the stage in order.

At 6pm the first audience members started arriving including my best friend and her mum.   After quick hugs I joined the poets downstairs in the mini-cinema for a vocal and physical warm-up with actor and Poetry School stalwart John Canfield — great fun — made me feel like the real thing! 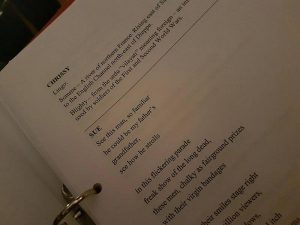 It was at this point that we learnt that around sixty tickets had been sold (earlier reports had mentioned 20)…   It was wonderful to look out on such a full, attentive audience as we performed our fifty minute response.

The performance went so smoothly and, to be honest, I barely remember it.   It seemed to go so quickly and after much needed refreshments during the interval (I had been unable to eat or drink beforehand!) we all took our places to watch the film.   This was extraordinary, even after so many viewings we all found we were seeing different things and could have written a whole new performance piece which would have been entirely different in its focus.   Seeing the film and relating it to our poetry was revelatory — everyone’s piece opened the film up in different ways and the audience were so appreciative of the whole event.   I still can’t believe I was there, but here’s a picture to prove it! 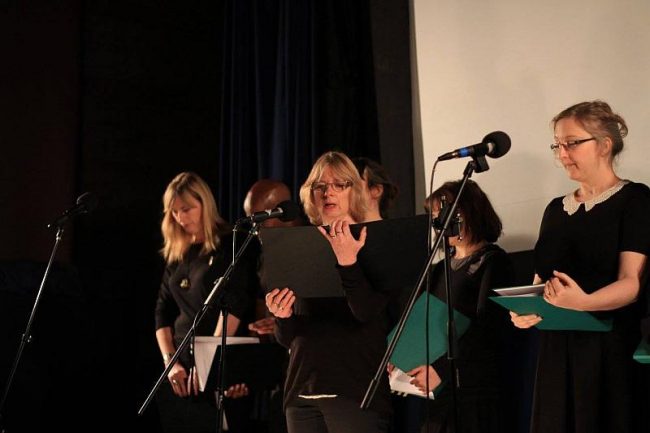