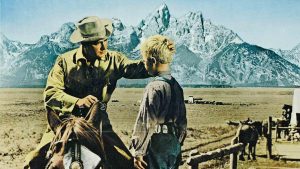 The second part of our US trip took us to the Wild West for a week exploring Yellowstone and Grand Teton National Parks in Wyoming and Montana.  I grew up on a diet of cowboy films, John Wayne in The Searchers, Alan Ladd in Shane, Gregory Peck in The Big Country and many, many more.   Seeing scenes from these films come to life – the razor sharp crags of the Tetons, the old, wise rocks of Yellowstone, herds of bison on the plains, a coyote leaping on a small critter and then chewing it at some length… was an extraordinary experience. 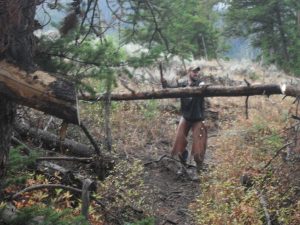 We rode out on a trail with Hunter who, reassuringly, packed a pistol as we had learnt the scary way that you are never far from a bear on the trails (eight sightings in eight days!).  Bat-eared moose deer watched us from between the trees and at one point Hunter sprang from the saddle, hoiked a handy saw from his saddlebag and cut down a tree blocking the path.  He was up in Wyoming for the season, away from his usual work as a cattle drover in South Carolina.  I tell you, I sure could get used to being called “Ma’am” in a Deep Southern drawl… 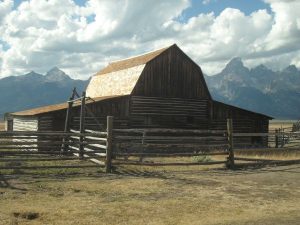 There were so many poetic moments, my notebook was full of frantic scribblings, but what I was seeing was almost as difficult to capture in words as it was to do justice to in photographs.  How to describe the particular yellow of aspen leaves just beginning to turn in the Autumn sunshine?  How to describe the deserted Mormon houses and barns in soft green meadows with the towering, snow-capped Tetons as a backdrop?  What could capture the smell of sagebrush leaves rubbed between finger and thumb – a cross between cotton lavender and curry plant… 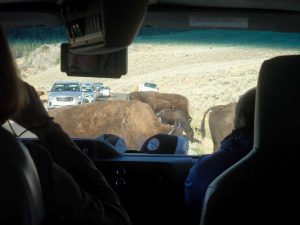 One of the best things about driving through the parks was the feeling that the animals were in charge as we got stuck in endless bison jams, elk jams, mountain sheep jams – seemingly no-one had told the animals that their traditional rights of way were now tarmac. 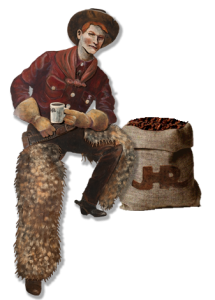 We were based for some of the time in Jackson Hole where we discovered the fantastic Wort Hotel as well as  The Jackson Hole Coffee Roastery which had varnished coffee sacks to create a highly original floor surface.   Coffee was mostly Twin Peaks style cups of joe – hot, vaguely satisfying and plentiful but we had to wait until Denver for a proper fix… 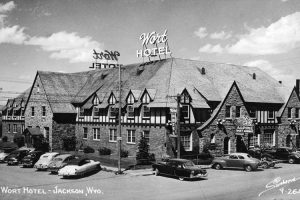 The Wort Hotel was built by homesteader Charles Wort in 1941 and its most famous feature is the Silver Dollar Bar. Charles bought 2032 uncirculated Morgan silver dollars from the Denver mint and most of them are embedded in the bar, although they do turn up in other places in the hotel too.  With its boardwalks and wooden architecture Jackson Hole was a popular location for the movies and many of the stars were attracted to the delights on offer in the Wort Hotel, not least some underground gambling. 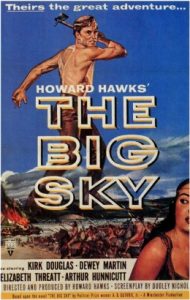 Shane was shot here, as was The Big Trail (1930) with 23-year-old John Wayne making his debut as lead actor and also his debut on horseback…  Clint Eastwood shot the big fight scene in Any Which Way You Can in town and Kirk Douglas dimpled his way through The Big Sky…  Quentin Tarantino, not to be outdone when filming his trademark violent take on the Western in Django Unchained, used the iconic Grand Teton peaks to evoke the savagery of the times.

Our final destination was Denver, Colorado where I spent the whole time feeling somewhat light-headed and dizzy – it’s a mile high and although I’ve had far worse attacks of altitude sickness in Peru and Bolivia this was a bizarre, sustained feeling, especially as Colorado is the first state in the US to legalise cannabis and has more “dispensaries” (official outlets) than Starbucks!   I couldn’t imagine getting high a mile-high without falling over but many people seemed to be managing perfectly well.  Cannabis tourism has hit the roof and there are magazines devoted to the various issues surrounding legalisation, adverts for yoga clothes made from hemp and heartwarming personal stories about the medical usage of cannabis. One magazine advertised a High Tea for mothers and daughters featuring “edibles” no doubt gleaned from the countless recipes for hash brownies, hemp-seed cake etc etc 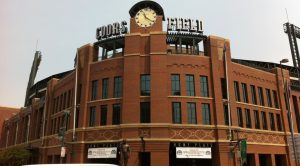 We spent our first night at Coors Field watching  the St Louis Cardinals slaughter the Rockies against a picture postcard view of the mountains the team are named after.  In between innings I stocked up on veggie dogs, fries and homemade lemonade.  Even the Beats loved baseball, it’s the quintessential American game – check out Lawrence Ferlinghetti’s “Baseball Canto”:

sitting in the sun

would hit a hole

in the First Canto… 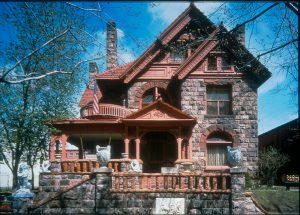 We discovered the story of pioneering, proto-feminist Molly Brown when we visited her fantastic 19th century Queen Anne style house with, it has to be said,  a slight touch of the Bates Motel….  This incredible woman was known as the “Unsinkable” – not only did she survive the Titanic voyage but she also insisted on turning round the life raft she was in to take on board more survivors.  Debbie Reynolds brings her to somewhat alarming life in the very cheesy Hollywood musical The Unsinkable Molly Brown with Harve Presnell as hubby J J Brown trilling his heart out in totally inappropriate operatic style.

Trying to find a good coffee place after our visit to Molly Brown’s we instead chanced upon Poet’s Row – six residential apartment buildings in Capitol Hil, all named after influential poets or authors. Would I be a better poet if I lived in the Spanish-Colonial Robert Frost building?  Could I write a best-seller if I resided in the Mark Twain art-deco style block?  Do you have a dream address and does it need the addition of a literary pseudonym for yourself to do it justice?  I will, in future, be Sophie Tindall of Brooke Heights… 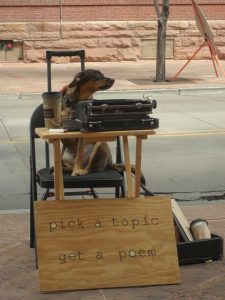 The Tattered Cover Bookstore became one of our favourite Denver haunts – an enormous, laid back place with a coffee bar, free literary talks and a fantastic range of poetry books and writing magazines.  I discovered David Mason, Colorado Poet Laureate, and bought his wonderful collection “Sea Salt”.  Mason’s language is simple and elegant, with a strong sense of place:

Below the blinkered traffic on the road,

almost unseen, the creek falls as it must,

called by downhill, called by the waxing moon…

Even the bookstore coffee didn’t quite hit the spot – for the right stuff check out Little Owl Coffee on Blake Street where the cool, beardy dudes treat it with the scientific respect it deserves. 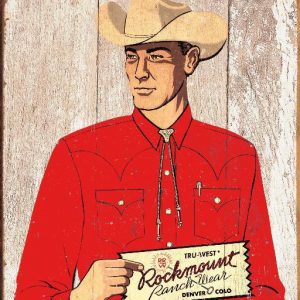 Surely  the best shop of all has to be Rockmount Ranchwear  (www.rockmount.com) which even sells books of poetry for cowboys and cowgirls! “The West is not a place, it’s a state of mind,” declared Papa Weil, founder of the store and inventor of the snap shirt (so you can keep your collar and pockets down!).  Everyone who’s anyone has been to Rockmount and bought one of their famous shirts – their celebrity gallery features stars from Bob Dylan, Willie Nelson, Cary Grant and Chris Isaak to Bruce Springsteen, Matt Leblanc and Paul McCartney!  Second hand cowboy boots, Stetsons, checks and plaids, fleece and flannel, ponchos and bandanas – “No-one knew more about dressing a cowboy than Papa Jack.”