So, this month we’ve been listening to I, Gemini.  Definitely the sound of summer, this is the debut album of Let’s Eat Grandma, Norwich-based teenage duo Rosa Walton and Jenny Hollingworth, both are multi-instrumentalists as well as singer-songwriters.  The album is getting great reviews, it’s trancey, psychedelic pop, deeply weird and wonderful…  I’ve known Rosa since she was born as I’m a good pal of mum Adrienne and was delighted to discover that the band were playing twice while I was in Paris.  The first gig was at Point Ephémère, a trendy warehouse venue by Canal St Martin and the girls were playing as part of Rough Trade’s Pop-up Store on Record Store Day (Jour Disquaire).  Their second gig was at Les Trois Baudets in the Pigalle area, just up the road from the Museum of Erotica.  Adrienne and I went for coffee and cake at the Amelie café (Café des Deux Moulins) and then joined the girls, Lee, their technician and Philippe, the record label’s local rep, for dinner in the great café above the venue.  Let’s Eat Grandma played their brilliant brand of pixie pop to an appreciative and enthusiastic audience and I helped out for a few minutes on the merch stall afterwards which was dead exciting 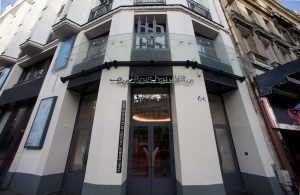 Let’s Eat Grandma have a cameo role  in one of the Flaneur style poems  I wrote over the course of three very long walks which encompassed practically the whole city.  This style of poem is, of course, inspired by Walter Benjamin, Edmund White and Baudelaire.  In a nutshell,  you walk and record your observations in poetry, prose or prose poetry.  The pace should be that of a tortoise.  I find this aspect more difficult than the actual writing as I am frequently told off by friends for walking too quickly!

I love walking and, as a non-driver, it’s how I get from A to B so I walk from both a practical and leisure motivation.  It’s an even greater joy when the days are long and dry when my perennial favourite is the North Norfolk coast path.  One great bonus in the past year or so for coffee addicts like me and Chris has been the discovery of Grey Seal coffee.  The roastery is in Glandford opposite the wonderful vegetarian Art Café www.art-cafe.org/northnorfolk which serves what must be the freshest coffee in terms of roasting to table.  Grey Seal is typical of the Third Wave coffee movement which is sweeping through the UK.  The roasteries and outlets have a stronger relationship with the growers and often use single estate coffees.  Caravan, near King’s Cross in London, even send their staff out to work with the pickers.   In December a Grey Seal café opened on the quayside at Wells and earlier in the year one opened on Westgate in Blakeney, a stone’s throw from the harbour. The coffee is excellent and the service is bright and friendly.  The Blakeney café has a tap built in to the counter to top up the doggy water bowl, used twice by thirsty quadrupeds while we sipped our expressos.  Dogs also get free biscuits, with the owner’s permission! 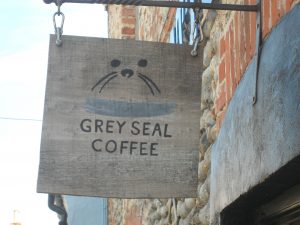 Walking and writing are such complementary activities.  The rhythm of walking very much mirrors the rhythms of poetry and I often walk stuck ideas out into the open.  I rarely want to write in the style of a flaneur when I’m out in the countryside, it’s very much an urban style after all, a bit like Frank O’Hara’s brilliant lunch poems – you need a busy scene with lots of people and activity and a slightly grungy feel to the whole scenario.   When out and about in the great outdoors haiku are the perfect fit – I seem to compose them endlessly the minute I get a whiff of fresh air.  This Japanese poetic style is much loved by Westerners.  Short, delicate, just three lines and 17 syllables in total (although balance is more important than syllabic perfection), haiku are a great way to record impressions and their focus is usually the natural world and the seasons.  The great Japanese haiku master was Matsuo Basho (1644-94), one of my favourites by Basho is:

I always find this haiku really thought-provoking and slightly chilling… My attempts will never have his lightness of touch, but I do enjoy writing them as seasonal diary entries.  The ones below evoke happy walking memories for me:

from the cliff edge.

a flying carpet of knots

A silken sphere of

Walking by the river;

a robin boldly leads the way

until the sky darkens.

marks on a clay pot

melting in my hand.

There’s also the haibun form – a mixture of haiku and poetic prose which is perfect for travel writing – find out more here http://contemporaryhaibunonline.com

Being out and about in nature much more means I don’t go to the cinema as much in the summer as I do the rest of the year, but thoughts about films and film-making are never far away and Norfolk has always been a very attractive location for film-makers.  It’s not as well known as other parts of England so can stand in for other places without being too recognisable.  Over time it has been Denmark, 18th century New York, The Netherlands, Sudan, India, Russia, France… as well as representing countless English locations. 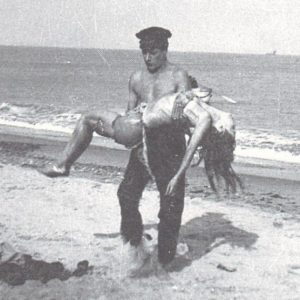 One of the first feature films to be shot in Norfolk was The Rolling Road in 1927 starring Flora le Breton.  Legend has it that the October sea at Great Yarmouth proved too much for the skimpily-clad heroine and she had to be saved by Carlyle Blackwell, her co-star, although some say she was saved not by the film’s hero but by Robert “Chickie” Drane, a Yarmouthian who was an acknowledged champion swimmer and lifesaver and allegedly doubled for Carlyle Blackwell in the aquatic scenes. 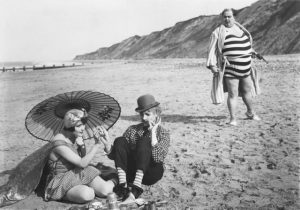 Another notable early film shot partly in Norfolk was Anthony Asquith’s 1928 Shooting Stars.  Chili Bouchier won a competition in the Daily Mail to become a film star and here she is as a bathing belle on Cromer beach.  One of our classic British films, The Go Between, starring Julie Christie and Alan Bates, was shot in Norfolk using locations at Thornage, Hickling Broad, Holkham, Heydon, Norwich, Melton Constable and Hanworth to evoke the hottest day of the year in 1900.  Norfolk is so held in time that I often feel I am walking in the past evoked by these films, until my next stop for an expresso shot at the defiantly 21st century Grey Seal, that is!

And a final tip for all of you interested in writing.  Luke Palder from ProofreadingServices.com contacted me to say they  have designed an infographic entitled “128 Words to Use Instead of ‘Very,'” located here: www.proofreadingservices.com/pages/very  Sort of a one-word focus thesaurus – “very” useful!