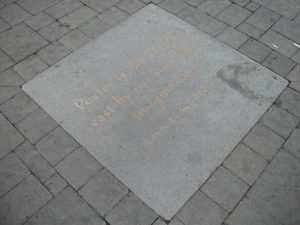 Poetry is the shadow cast by our streetlight imaginations (Lawrence Ferlinghetti).

First stop, as always, City Lights Bookshop to celebrate the Beat poets and their groundbreaking work.  Although the Beat movement started in New York just after the Second World War, by the 1950s it was firmly entrenched in San Francisco.   Poets such as Allen Ginsberg, Lawrence Ferlinghetti, Gary Snyder and Gregory Corso questioned mainstream politics and culture and battled against social conformity in new and refreshing ways, very much like our Angry Young Men movement in Britain, also a product of post-war disillusionment.  The bookstore was opened in 1953 by Ferlinghetti and published Ginsberg’s Howl, go to www.citylights.com/info/?fa=aboutus to find out more about this wonderful bookstore/publisher which retains its intimacy despite its popularity. 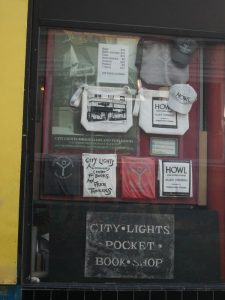 My favourite section is, of course, the Poetry Room upstairs and I always ensure I have plenty of time to sit in the Poet’s Chair in the hope that I’ll gain divine inspiration from the generations of poets who must have sat there before me.  Indeed, there’s even a notice to ask people to treat the chair with reverence – it’s a rocking chair and one over-enthusiastic poet (not guilty!) previously caused extensive damage. 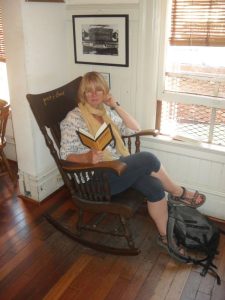 Here’s an extract from my imaginatively titled new poem “September in San Francisco”:

Rocking in the Poet’s Chair in City Lights Bookshop,

cool breezes from the alley below,

Lawrence Ferlinghetti speaks to me

in half-sentences with no commas of the gone world

and I understand for the first time.

If you want to find out more about the Beats then the film Howl starring James Franco as Ginsberg and focusing on the revolutionary obscenity trial surrounding its publication is a great place to start. 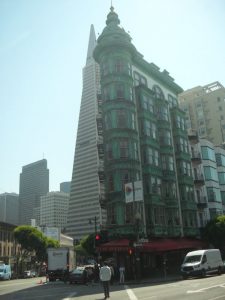 San Francisco oozes cinematic references and while Chris had fun at the Oakland A’s ballpark I went on a Silent Film San Francisco walking tour.  It’s possible that if it hadn’t been for the 1906 earthquake and subsequent fires which devastated the city that it would have been the hub of American film instead of Hollywood (although the famous San Francisco fog may have put off studio moguls…).  What better way to recover from a walking tour than a glass of chilled white wine, and what better place to sip it than Francis Ford Coppola’s very own restaurant, Café Zoetrope (www.cafezoetrope.com) which serves wine from his very own vineyard!  The café is in the historic Sentinel Building, one of the post-earthquake landmarks, which, at one point, housed a recording studio owned by The Kingston Trio where bands like the Grateful Dead hired the space.  Coppola bought the building in 1972 to use for his production company, American Zoetrope, which he founded with George Lucas. A number of Coppola’s films including the Godfather II and III, Apocalypse Now, The Conversation, One From The Heart, The Outsiders, and Dracula were written, edited, or sound mixed there and the walls of the Café, which Coppola created in 1999, are full of fascinating Coppola memorabilia.  Oh, and my 2010 Chardonnay Director’s Cut (Sonoma Coast) was excellent! 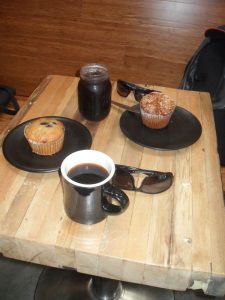 The coffee scene in San Francisco is to die for, you can’t move for Third Wave Coffee shops.  One of my favourites was Flywheel Coffee Roasters in Haight Ashbury, just opposite Golden Gate Park.  The company was founded by Aquiles Guerrero, a Nicaraguan who grew up on a coffee estate so he certainly knows his stuff.  We discovered they also did vegan muffins which went very well with my cold brew coffee (steeped in cold water for 18-24 hours, this is one of the hot(!) new trends in the coffee world).  I also tried a nitro sample which is, apparently, the next step after cold brew.  The coffee is infused with nitrogen to give it a Guinness-like flavour – it’s really smooth and comes with a frothy head, it also packs quite a kick! 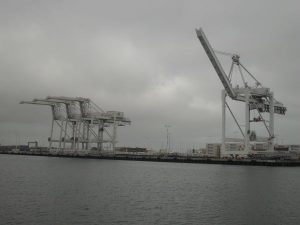 Another favourite was Blue Bottle Coffee which we discovered on a trip to Oakland across the Bay (coupled with a baseball game of course!).  We took the ferry – check out the cranes in the docks – they have to be George Lucas’s  (a local lad) inspiration for the huge white fighting machines in Star Wars.  Oakland is a strange city, blue-collar, run-down but also deeply trendy and happening and full of vintage cinemas!  Only one of the cinemas is still operating as such, The Grand Lake Theater, 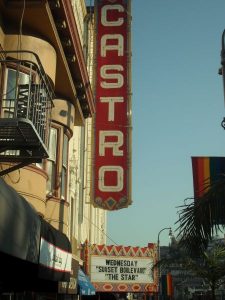 and we couldn’t factor in a visit this time but compensated with a double-bill at our favourite SF cinema, The Castro,  where even the usherettes became famous movie stars – Janet Gaynor started her career here!  The Castro is always an experience, a mighty Wurlitzer performance begins each show with cheesy classics.  The audience clap and cheer when the stars come on and are, overall, very interactive…  “Sunset Boulevard” was a joy, as always, and the accompanying film, “The Star” featured a wonderfully hammy Bette Davis.  At one point I did wonder if someone was holding up cue cards for her with the pauses marked in all the wrong places… 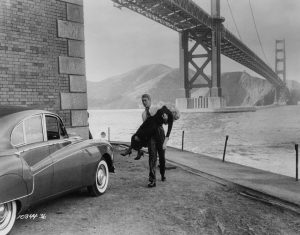 San Francisco’s most famous appearance in film is, without a doubt, Hitchcock’s Vertigo and we went on a fascinating “Hitchcock’s San Francisco” walk.  We did around six walks, all with the same organisation www.sfcityguides.org – well worth checking out.  I’m due to teach a Cities on Screen session on films featuring San Francisco so took lots of geeky photos but felt I should be swanning around in heels, a grey, tailored suit and a classy handbag like Kim Novak rather than jeans and flatties. 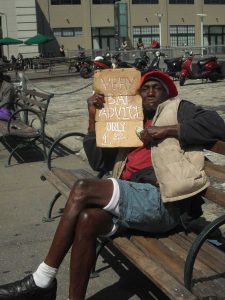 One of the downsides of San Francisco is the number of homeless people in the downtown area living rough amidst the affluence.  How they manage to muster a sense of humour is beyond me, but the evidence speaks for itself! 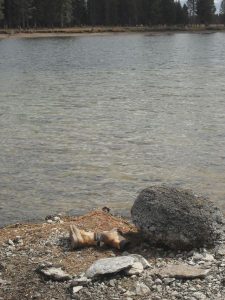 Those of you who come to my creative writing classes know that I’m an inveterate collector of images to use as writing prompts and, for all you budding writers out there, I thought you might enjoy these two photos, both taken in Yellowstone National Park which was our next stop for eight days of sparkling wilderness and bear-spotting! 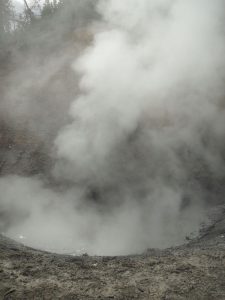